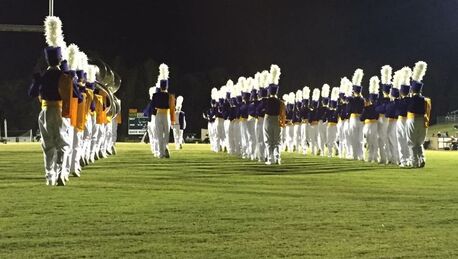 Anthony West graduated from Broughton High School in 1980.  Although he was not a member of the band as a student, he knew the value of music.  When his oldest daughter, Mary Catherine, entered Broughton in 2008 and joined the band, he was hooked.  He, and his wife Cathy, attended all of the football games and competitions and stepped in to help whenever needed.  During their first band trip to New York City, Anthony was asked if he would like to become a member of the Hospitality Committee. In addition to feeding the band, he was always there to assist in moving pit equipment, repairing coolers, photographing the band, and fundraising. After returning from the 2012 band trip to the Tournament of Roses Parade, Anthony was diagnosed with cancer.  Although it slowed him down, he continued to play an active role in his youngest daughter, Rebecca's, band career.  He would still help with hospitality, fundraising, and repairing band equipment, including pit instruments. Anthony lost his long battle with cancer in June of 2016.

The Broughton High School Band Boosters is proud to invite you to donate to the Anthony West Memorial Scholarship Fund. Anthony's dedication to the Broughton Band has shown what it means to support the kids in the band and the entire band family. It is our intention to use this Fund to provide some monetary relief to those families that struggle to afford their band fees. The Band Boosters, along with our director, Margie Harrison, feel very strongly that ALL STUDENTS interested in pursuing instrumental music and color guard should be able to do so at Broughton. However, being in band entails certain costs - instruments, music, uniforms, and other equipment. We acknowledge that, although Broughton Instrumental Program has one of the lowest "Fair Share Fees" in Wake County, this fee may still be a burden to some of the families interested in being in the program. Therefore, we are committed to making these fees and the participation in instrumental music at Broughton more accessible. The Anthony West Memorial Scholarship Fund honors the legacy of a man committed to Broughton, Band, and Family.
We are asking for your assistance in funding the Memorial. We plan to award scholarships annually. The more money that is built into our Fund, the more students we are able to assist.

TO DONATE TO THE SCHOLARSHIP, please just designate 'scholarship' on your check or money order, or in the notes of your Paypal donation.

return to the support page